Day out to the Whispering Wall

Maz (my self adopted sister) came to stay at our place for the weekend, and yesterday I took her for a drive out to see the Whispering Wall as she'd never been there. Raelene couldn't come as she is still feeling pretty lousy with the flu.....I'm still trying, or rather my immune system, is still fighting it...fingers crossed I don't catch it.

The Whispering Wall is in fact the retaining wall of the Barossa Reservoir. Built between 1899 and 1903, the dam was a revolutionary engineering feat for its day and attracted attention from all over the world, even making its way into the pages of the journal Scientific American.

But what draws visitors to the Whispering Wall is its unique acoustic effects: words whispered at one side can be clearly heard at the other, more than 100 metres away. Children in particular love visiting the wall and testing its abilities.

Besides trying out the Whispering Wall, visitors can also learn about the history of the construction of the dam, take in the scenery of the water reserve and enjoy the colours and sounds of the peaceful bush setting. The information in italics is taken from this website 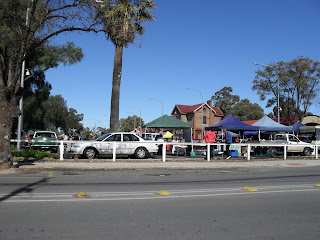 As we headed into Gawler, I noticed a sign at one of the roundabouts, advertising a LIONS club market.....and a slight detour down the next side street, voila, we were at said market (see above pic). It's a nice little market...more plants & Trash 'n' treasure than hand made goodies, but I did manage to score a big bag of poly stuffing that I can use in softies, and a basket I originally bought with the mind of using it on the stall, but Maz liked it so much, I gave it to her. I also bought Maz a sage plant from one of the stall holders. 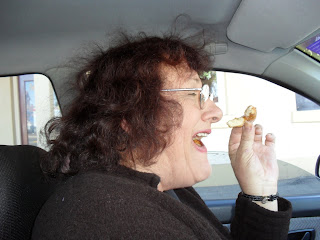 Maz eating some hot donuts....I've read every page in the diet manual, and apparently if you buy hot donuts and only take photos of others eating them, then yours have no calories.....well I thought it was worth a try...lol I paid for it though....had a plus of 1.4kg on the scales this morning when I got on them, but my weight loss/gain yo-yo saga is a completely different story, and one I won't bore you with. (P.S. Maz will probably kill me for putting this photo on the blog, but I how could I resist...especially when there's no photographic evidence that I ate any? lol)

After our stop at the market, and once we'd eaten our yummy hot donuts, we finally made our way through Gawler, and off to the Whispering Wall. 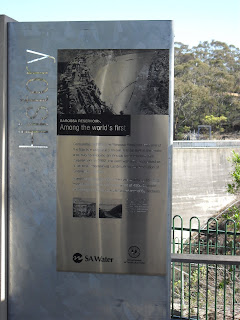 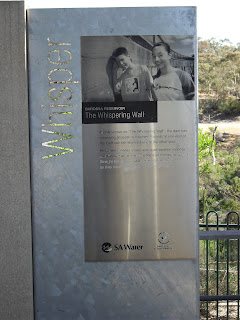 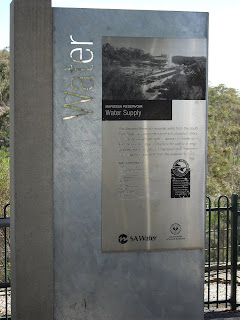 The above three signs show information about the Whispering Wall and reservoir...unfortunately vandals and/or weather have obscured most of the information, but if you followed to above links, you will have been able to read about this ever so interesting landmark here in South Australia. 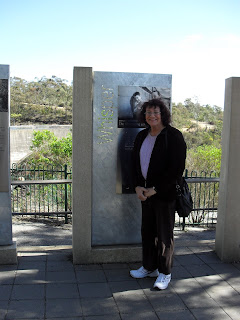 Anyone who knows Maz will know that she's just a little bit well known for her love of a bubbly called "Whispers".....how bizarre that of the three information signs, she just 'happened' to pose in front of the one with the word WHISPER on it...lol 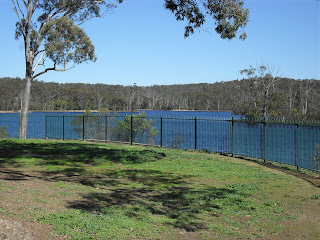 This was taken from just near the carpark, to show the actual reservoir that the dam holds back. 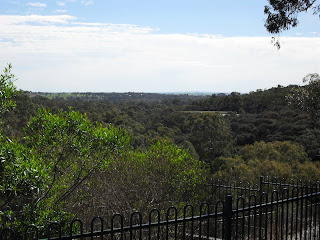 This pic shows the view from the carpark end of the dam to the right. 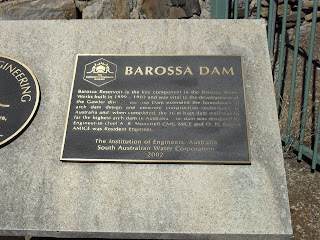 This is a location marker that I was standing near, whilst I waited for Marion or Maz, to walk back around. 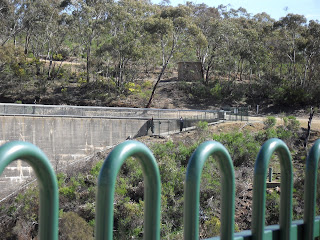 You may need to click on the above pic to enlarge it, but in case you don't have time, I told Maz to "wave for the camera" which she did...and you can just make her out waving at me.....bear in mind, that I told her this into the wall and it sounded to her like I was just near her....amazing! 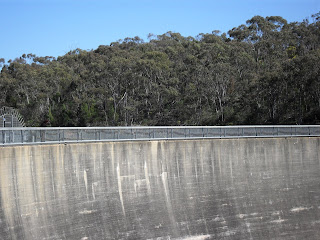 If you look closely, you can just make Maz out as she walks around to the other side of the wall to give the acoustics a test. Hint....she's looking over the railing down the dam wall. 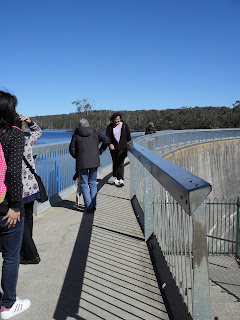 This was as Maz was walking back around to me. Notice I was kind and made her do the walk around the top of the dam??? lol 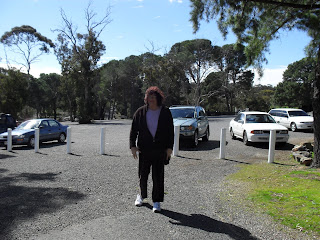 This was taken as we headed back to the car, to go back to Gawler, where we had a very filling lunch at Cafe Nova.

Had a quick trip to Spotlight on the way home, but alas they didn't have what I was after.....should've gone sooner to get the Minky fabric to make my DGD a pillow buddy that I saw on Elizabeth of twelvecraftstillchristmas blog.....I'll find the link for you so you can see what I wanted to make her.

Posted by Beeshebags at 9:11 AM