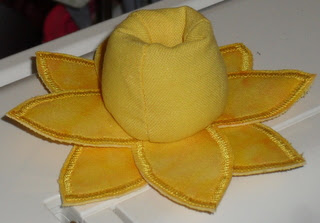 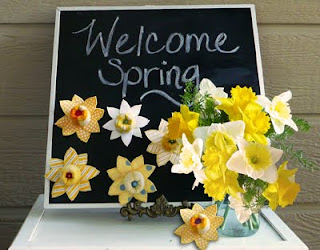 Posted by Beeshebags at 11:22 AM 13 comments: Links to this post

Recently I entered a Notebook/Journal Cover swap here...and tonight I got confirmation that my partner has received her cover, so I can share pics of it.....I did actually buy a pattern similar to the one I made, but alas, the person I got it from is away for a few more days, so it wouldn't have arrived in time for the deadline, so I cut and sewed the BG Notebook cover. I've written down the measurements, so it'll be interesting to see how close to the mark my measurements were hey? 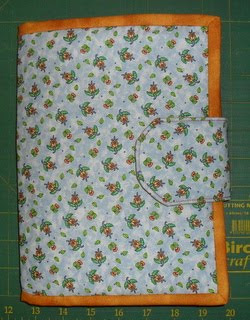 This is the front of the notebook/journal cover. I even managed to stitch the flap in the right way round and on the correct piece when I attached the binding...do I sound pretty chuffed with myself? You betcha! 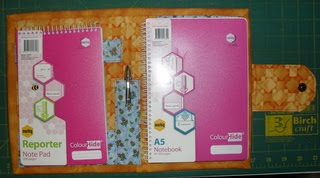 This shows how I set up the interior for Barb. She has a choice of notebooks, depending on what she's wanting to use them for....both notebooks are easily replaced, and readily available here in Australia. Glad you like it Barb.

Now for the Show & Tell part of this post.....I'm a member of a craft forum, which you too can join, by clicking here. This year, Vicki is hosting a Sampler BOM experience....so I'm participating....I've done 2 of the 6 blocks so far....one each month, but, in my defence that is all I HAVE to do, the other 2 a month are bonus ones....if I say it often enough, I'll believe it, lol

I don't think I put last months on here yet, so I'll put that one up first. This one is the Baby Bud block, and you can find the tutorial for it here. 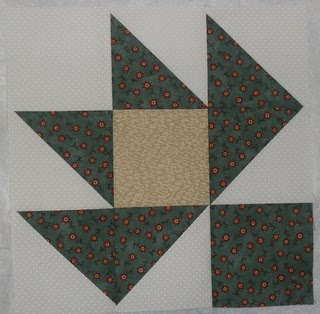 Then with this months', the Balkan Puzzle block, which you can find the tutorial for, here. I decided to sew 1/2" away from the 'sewed on' line and cut between the two rows of stitching....thus giving me 16 hst's, which I trimmed to 2 & 1/2" HST's and played around with layouts until I found one I liked....and tah-dah...if anyone happens to know the name of the smaller block, can they please leave a comment with the name of it? Thanks. 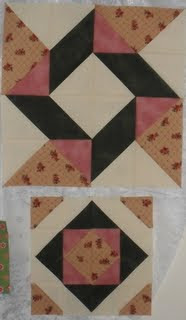 Thanks for stopping by, and I'll have more swappy type show and tell soon, as the Easter swap parcel is on it's way to it's new owner and should arrive soon. Please leave a comment, even if it's just to say hi, it's nice to know that someone is reading my blog still!

Posted by Beeshebags at 9:13 PM No comments: Links to this post 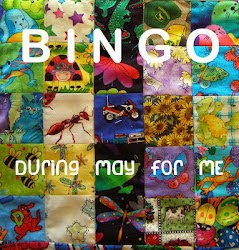 I've played a couple of rounds of Quilt Bingo in the past, but this is something new.....You make your own BINGO card and supply it to Tonya before April 22nd to be eligible. If you want to find out more or sign up for it yourself, then click on the Fabric bingo card above. You will notice that there's a link for a tutorial to make your own BINGO card, but I've also put that link HERE for you. My Mum (RIP Jannyman) loved going to Bingo, and was quite lucky, so I like to play in her memory....wish me luck!

Email ThisBlogThis!Share to TwitterShare to FacebookShare to Pinterest
Labels: Bingo, May for me

I'm not sure if this is going to work, but I have everything crossed. I love the simplicity and speed of this method and the fact that there's no hand sewing (lol) and it's all quilted and ready to be used (unless you're going to wash it that is) the minute you stitch the last stitch. Gonna have a go at making one of these....I don't have the ruler she uses, and have had a quick squizz on the net for one, but it proved too hard so I've given up and will just 'wing it' lol

Stay tuned to see how I go, as I'll post progress pics when I do try it.

Posted by Beeshebags at 3:48 PM 4 comments: Links to this post

Email ThisBlogThis!Share to TwitterShare to FacebookShare to Pinterest
Labels: Fun and Done

I've been wanting to do this for a while now, but timing hasn't been right (like how I make it sound like I'm always uber busy lol?) however, this time I'll be there and will be sewing. If you want to join the others, and there's people from everywhere participating, then click on the button above to go sign up.....it's this Friday crafty guys and gals! Now I'll have to work out the time difference so I don't prematurely sew in!