Another week flies by

As much as I don't even want to think about it, with the way time is flying by me this year, it'll be Christmas soon, and what have I done about my big plan of making 'stuff' for people this year? Na-da so far, but have worked out a few gifts to make, which is a bit closer....right?

This week I've made more of the hexagons almost into coasters....which you can see below...a few chrissy ones and a couple of 'everyday use' kind of style ones. 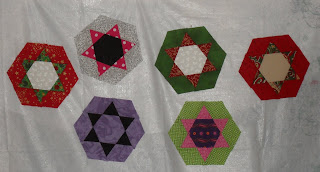 Also, this past weekend, a friend came up from Adelaide for a couple of days....and she's making a couple of quilts (unlike me, she's a good girl and making them one at a time...I'd be doing bits of both, knowing me!). Sue had cut out 40 of each colour way, so she only had to assemble them, but she's not a very experienced sewist or quilter, so it was quite an achievement for her...and I might be a bit biased, because of the colour choices on this one...but didn't she do a great job? 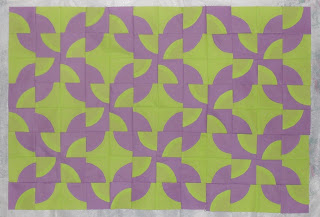 Just F.Y.I, the other one is going to be turquoise and red. The name of the quilt according to the pattern she's using, is Garden Paths...but it didn't have a name of designer on it.

From Sunday 10th - Sunday 17th on my Facebook wall (or is it still called a page? lol) I held a 'poking' competition....every time someone poked me, I jotted down their name in an excel spreadsheet, and then on the 17th I got random.org to randomize the list of names and after reaching over 800 pokes, I decided to use the top two names....so tonight I'm making them something.....not sure what, and I won't be able to post pics on here, as 1) my blog is networked to my Facebook, and 2) one of them reads my blog too!

Posted by Beeshebags at 7:56 PM