A wee while back, I was fortunate enough to be drawn as one of the winners on Terri's (of Sew Fantastic fame) great 12 Days of Christmas giveaway. To see a list of all the winners, including me, click on the title link. Star Primm gave me an option on my win, to either pick a print from her Etsy shop, or I could have a copy of her "Oliver the Owl" pattern....well it doesn't take a rocket scientist to work out which I'd pick hey? lol A big thank you to Terri and Star for a great giveaway.

I would've blogged about this sooner, but I really wanted to make an owl up for Khristina for Christmas, and wanted it to be a surprise......so that's why I'm only just blogging about my win now!

Yesterday, although we had a little bit of confusion about why Khris was visiting me, we got there in the end, and I'd made the owl for her in the morning.....so it would be ready for when she got here....I was a bit concerned about her liking the owl.....seens as though Raelenes face lit up when I first showed it to her, and then she decided she didn't like the wing fabric choice I'd made, but I was fairly confident (ok, more like hopeful..lmao) that Khris would like it.

I was right, she loved it, or at least that's what she said when she unwrapped it. Here's a couple of pics of the completed owl, and also a gratuitous shot of Khris holding her new parliament member....tee hee hee....see Khris, I don't need to make you another one, you already have a parliament *grins* 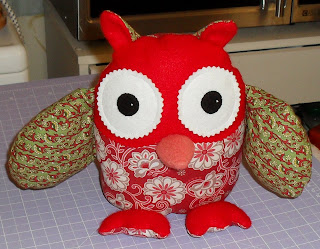 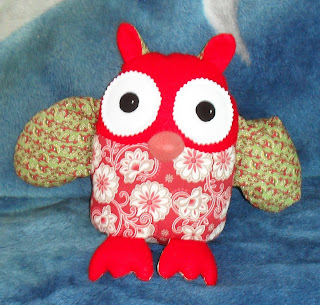 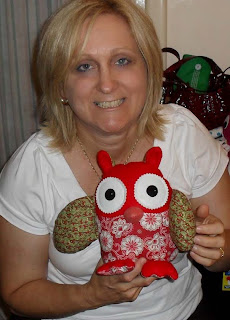 Just edited to change the pic of Khris.....she photoshopped my pic, so I've now got one that she's happier with!


Hugs
Naomi
Posted by Beeshebags at 10:34 AM

Email ThisBlogThis!Share to TwitterShare to FacebookShare to Pinterest
Labels: I won, Owls