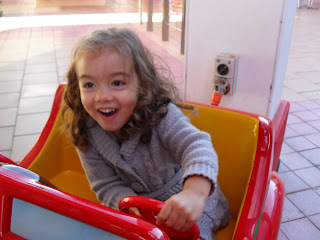 Why yes, she is, and yes, I sure am biased...lol I met up with my darling daughter, Hayley, and her sweetie pie daughter TaShie today at a place called Harbour Town in Adelaide. It's a brand direct outlet shopping precinct. Bubby (one of my many nicknames for my DGD) is in one of those kids rides you see around many shopping centres worldwide....she loved this car, except when she pressed the red button, which made the car kind of lurch forwards and up....however, her face was a real picture. 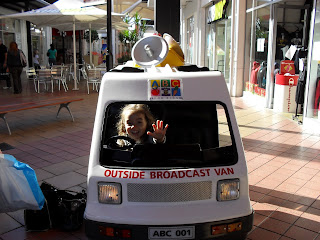 After bribing her to leave the car, with a promise of another car being up ahead, we had a slight stopover at a carrousel ride, and then, after coaxing her off that, we found this ABC tv van for her to ride in, she wasn't telling me to stop in the above pic, but 'waving Nanny' lol 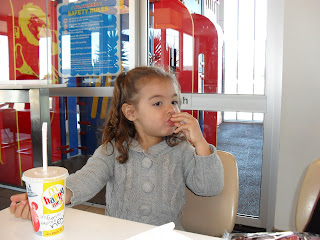 Whilst Hayley went to a different shop (to the many that we'd already visited) my ex MIL, Chrissy and I, took bubby over to Los Arcos Dorados or The Golden Arches....in other words, Macca's. On the way over there, I asked TaShie if she wanted a 'Happy Meal' and she said "yes please Nanny, with chicken and juice and CHIPPEEES!" She was quite precise with her order. Hayley ended up ordering bubby a Fanta....and here she is tucking into her Chicken nuggets.

All in all, it was a brilliant day, and I love my girls to bits. TaShie even afforded me her first 'wink' lol I was trying to get her to repeat I love mummy after I said it one word at a time, and she got as far as I and thought I meant eye and promptly winked at me....lol How cute. She cocks her head to one side when she does it, and it just melts my heart to watch...then she makes me laugh when she has to use her finger to get the other eye to do it.

She also plays a little game of rolling her eyes and then pointing to someone else, such as Chrissy, and telling her "it's your turn" lol

Another cutie thing she's picked up, is "Come on" or "Come on I'll show you" and drags you to see whatever it is, that's caught her eye.

I tried uploading a funny as video of her (apart from the eating with her mouth open....you can even hear me telling her to close her mouth when she's eating) 'perving' on a young boy who was going into the playroom just behind where we were sitting, but after about 3 hours, I gave up trying to upload it through here, might have to put it on YouTube and embed it here somehow....unless someone can tell me how to get the dang thing uploaded an easier way?????

Hope your Saturday was as much fun as mine.