I happened to stumble upon Karen from Sew Many Ways' blog early this evening, and she has a post about Sew Sew Saturday...I cheated a little....I was planning on sewing tonight anyway, but by commenting on her post, it meant I had a bit more incentive to finish some things, and post them! 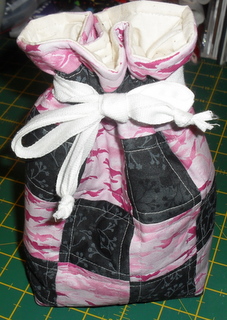 First up I made this cute wee patchwork gift bag, tutorial can be found here.  I decided to make mine fully patchwork, but the tutorial has instructions on how to do it with a plain back as well as how I did mine.  Doesn't really take all that long to make.  I've even made a mental note (well written actually, as I've printed the tutorial off, and have noted it on that) to keep an eye on directional fabrics! 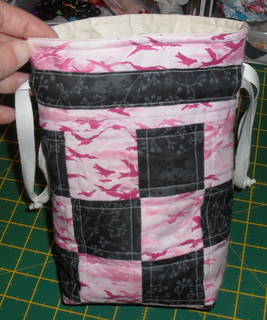 The following is another free tutorial, that you can find here.  Personally I think the tutorial is a bit hard to follow, but probably clear as mud for all you 'veteran' quilters....me not so much!  I ended up kind of winging it in the end....as I couldn't work out what 3/5 and 2/5 in the tutorial meant lol 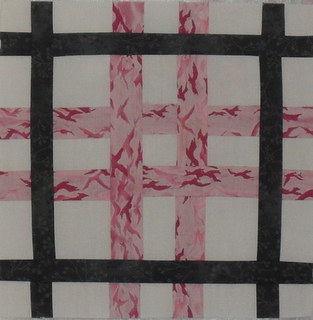 For the pink I made the cuts at 5 & 1/2", adding in a 1 & 1/2" strip each time and rotated the fabric square as stated in the tutorial.  For the dark grey, I made the cuts at either 8" or was it 8 & 1/2" and used 1 & 1/4" wide strips.  Lots of getting up and down to move between the ironing board, cutting mat and the sewing machine, but went together fairly quick once I'd worked out that I was going to fly solo hee hee hee. 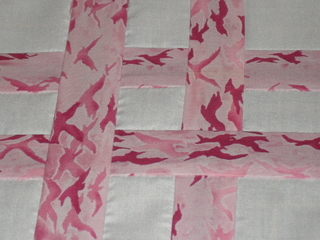