Isn't it funny how things trigger your brain to singing certain songs?  Well ok, isn't it funny how my brain is triggered into singing certain songs?  The laundry bag and quilt below are heading off to a very deserving Navy crew member aboard HMAS Anzac as part of Operation Slipper....what song do you think I was singing as I packaged it all up in it's postpak box today?  Yep, "In the Navy" by The Village People lol 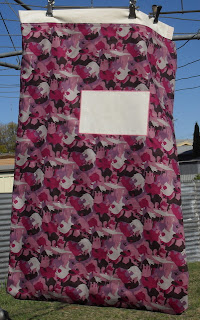 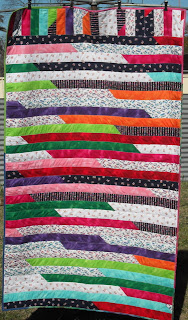 Hopefully the new owner of the quilt will love it as much as I did, when I was doing the binding last night, I so didn't want to part with it lol  A little story about the quilt...the batting and backing fabric was donated to Aussie Heroes by Berri Uniting Church (Thanks Helen), the front (or flimsy if you know a bit about quilting) was donated by a Malaysian friend for using for Aussie Heroes....and one I had the quilt top trimmed to the right size and was in the process of quilting it (which I just did staggered zig zag stitch horizontally over the stripes.  Just in case you're wondering, it's one of the Jelly Roll Race quilts) As I did so, I was trying to decide on what I thought would be the best colour to use for the binding.....in the meantime, I'd had a parcel delivered yesterday, all the way from USA (Thanks heaps Susan A) who sent over a stack of 'horsey' fabric rectangles and two rolls of homemade jelly roll strips....all in yummy bright colours.....kaching.....picked out 6 of them, and tah-dah quilt binding sorted!  So this really is a worldly quilt hey?

The laundry bag is from some cute animal camo print I picked up in Spotlight on my last trip to Adelaide.....I ended up getting 3 laundry bags out of it, so I'll have to get Jan-Maree to pair the other two up with one of the troopettes (female troops lol) in Egypt and one in Afghanistan.....got some yummy grey camo for the guys, but only had enough for 2 laundry bags from that.....but yay, at least I have a couple in my laundry bag bank now.

Posted by Beeshebags at 6:58 PM