What I did today

Well today was one of those typical days where you were busy, but didn't actually get anything done! lol

I went with my friend Khris for a drive up to the Adelaide Hills to check out a few 'craft' markets.....having spent absolutely ages finding these places, we came to the conclusion not to bother going to any of them to sell our stuff at. We haven't given up entirely though, and have plans to go find some more ones she comes back from gallivanting up in Queensland! lol

I haven't got any pictures to add to this post, but better no pic than no post I reckon!

I'm thinking about either hosting a swap soon, well maybe in August or September....any suggestions as to what sort of swap???? I'm currently in a F-R-I-E-N-D-S swap, and two Xmas in July swaps, although one of those is only a really small one ($5 value) but it all counts.

I've only been in two other swaps this year, and they were an Annie Doll swap....and a heart swap...so I'm not really the best for using my imagination for swap topics......perhaps a pincushion swap????

I'm hoping I get a few ideas, and then perhaps what I can do is number all the ideas, and select one of them via random.org and whoever's gets picked will earn themselves a small prize.....yet to be decided on.

In the pipeline, I currently have 9 Gracie dolls cut out, partly sewn....and OMG aren't I beating myself up over that....guess who forgot to trace the faces on before she sewed the bodies up? Yep, ME, ME and only ME.....I can be such a klutz for someone who likes to think she's fussy....lol

Ok, don't forget to leave a comment and tell me what you think would be a good idea for a swap for later in the year, and then as to whether you would participate or not so I can weigh up whether it's worth it.

Look what I just made 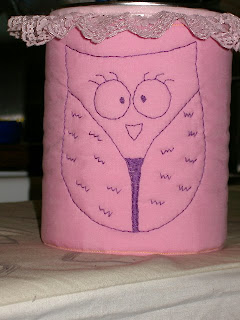 Ok, not technically correct, as I already had the tin set up as a money tin, it just still had the coffee label on it! lol I've now put a pretty pink sleeve on it and hand embroidered an owl onto it.....c'mon, you already knew something about it was going to be purple didn't you? lol

Ooooh this one even has money in it! lol Excuse the toe of my sneaker visible in this shot! 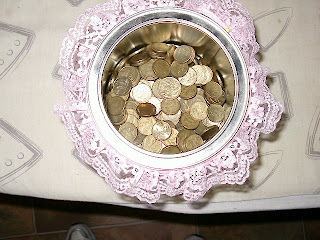 This one proves that dust bunnies live here and are trying to steal my savings! 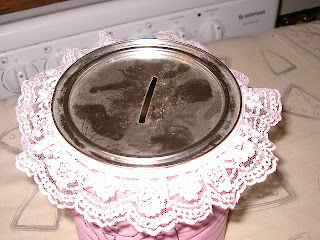 This was supposed to have a bee stitchery on it, but I kind of miscalculated the sleeve that matched that one, and Raelene helped me with the measurements on the pink one, which is a prototype for the ones I'm hoping to sell.
Now, what I'm hoping you'll do, is leave a comment, and say whether you'd buy one, and if so, roughly how much would be a fair price to pay for one? Thanks heaps. I understand that most of the people that will visit and make a comment already make great items themselves, but everyone needs a bit of advice sometimes right?
Hugs
Naomi
Posted by Beeshebags at 9:46 PM 4 comments: 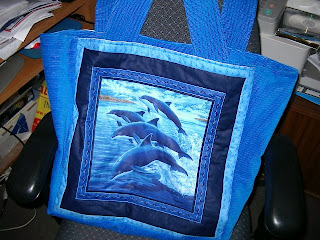 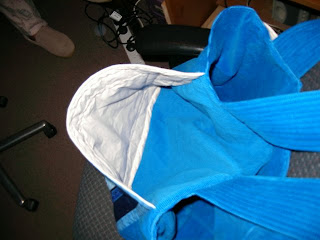 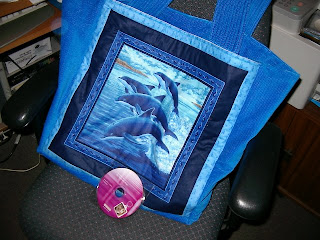 I've just made another dolphin bag for my friend Chrissy....it's made from two cushion panels that I ironed vlieselene stuff (lol) onto them, and then when I backed them with Calico, I kind of quilted the panels.  I made the body of the bag (badly - long story so wont bore you all with the details) out of turquoise corduroy fabric....it's a super large bag so she can store a whole knitting project in it and pop her pattern and spare needles in the outer pockets.
I've put one pic up of a cd next to it (the pinky round thing in front!) so you can kind of get an idea how large the bag is.
If I were to make another one of these, I'd definately make it with uniform cushion panels....one of these was way out of whack and really peeved me, but I used it anyway...coz I'm a dag!
Hugs
Naomi
Posted by Beeshebags at 10:51 AM 3 comments: 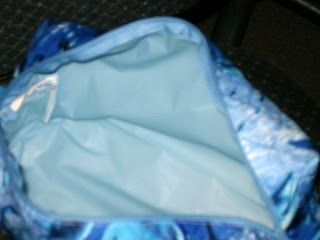 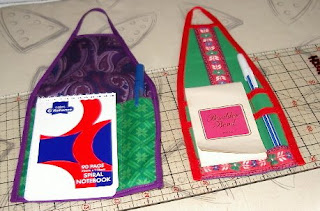 I bought the holder on the right at a thrift store...thinking I could make something similar and give them as gifts...well yesterday, I decided it was about time I made one....so the one on the left is my attempt...did I do ok? Would you be happy to receive one?? I don't want to go crazy making them if no one thinks they're an ok thing! 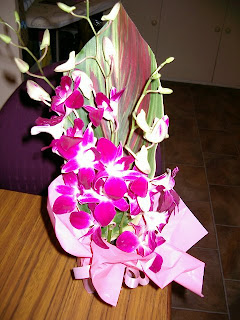 Ooooh Aaaaah such pretty flowers hey? These orchids were bought for me by our good friend Penelope when she came to visit on Wednesday...yes I know, I'm slack for only posting pics now...at least I remembered to take the pics while the flowers were so fresh and vibrant looking. Thanks Penelope. 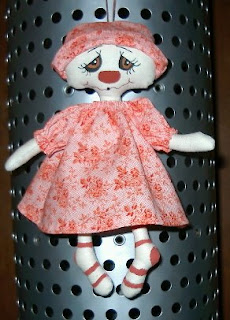 Well I've decided to trial out this thing that my friend "Aunty Sharon" recently learnt how to do...you can see her fantastic blog here.  I'm actually posting this direct to my blog from my email service!  How cool is that?  I think it's brilliant, and if I've set it up correctly, it could mean I'll be posting more often!
I'll even try and attach a pic just so I can see whether it all works!  The pic I've decided to attach is my version of "Gracie".  This pattern is from Cath Ü's wonderful site
and if you click on that link, it'll take you to her blog and you can check out all the wonderful things her and her gorgeous hubby, Ronnie make.....aren't they brilliant????
Hugs
Naomi
Posted by Beeshebags at 9:41 AM 2 comments:

Not something I believe I could eat...not first thing in the morning anyway! Maybe for brunch....anyway, as usual, I digress from why I'm posting.....Salad for Breakfast is actually hosting a giveaway for a talented young Aussie who has an ETSY store called Nooshka. Anyhow....go on over to Salad for Breakfast by clicking on any of the links in the body of the message and follow the instructions there to win Kirby....although I'd really like to win him myself....I love owls.

Good luck and if you win, come back and leave a comment so I can be truly jealous!

Hugs
Naomi
Posted by Beeshebags at 8:37 AM No comments: