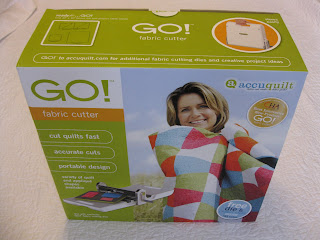 I had a wonderful time at the retreat. We ate, we talked, we laughed and we even managed to find some time to do some crafting too! What more could a gal want? An Accuquilt Go! would be on my list, that's for sure! And as luck would have it, I just found out about a Go! giveaway that I think I am eligible for.

Millie's Quilting has a giveaway on her blog for a GO! and 3 dies.....whoop whoop.....which 3 would you pick? I have decided on the 2 & 1/2 " strip, the 5" square, and I used to want the Dresden plate die, but think I'll have a change of heart this time, and see if greediness (for an expensive die) is what's prevented the giveaway fairies from taking pity on me thus far! So my third choice is the GO! circle.

Click on the above pic to head on over to Millie's blog and enter the comp for yourself.....I know that whilst I'd be jealous and GO! as green as the GO! with envy if you won, I'd be cheering at the same time, that one of my lovely readers won it. You have until October 2nd to enter.....so good luck, I'm back off over to her blog now, to complete my entries!

P.S. For those who are able to pick up on sarcasm in it's written form, that comment above about this GO! giveaway being one I'm eligible for, is because I'd been madly entering the GO! giveaway in Accuquilt's Friday Fun, only to find that I'm not eligible to win, as I'm not a legal U.S. Resident......SO, to win my GO! I'm making sure I keep an eye out for blog giveaways, as I believe they are open worldwide.....fingers crossed or I'll be upset again!
Posted by Beeshebags at 9:43 AM 5 comments:

I'll be AWOL for almost a week!

Why? I hear you say...well that's because it's my annual retreat with Khristina and some of the other gals from her Yahoo Craft group. We'll try not to have TOO much fun, but I'll have lots of pics when I come back.

Until then, stay safe and sew lots.


Obviously the excitement of it being a "mystery" giveaway prize put alot of people off, but I'm sure that the winner will enjoy what I send her....yes, I'm still keeping it a mystery right up until the time that I know it's arrived at it's destination.

Oh, what's that I hear you say? Was it stop waffling Naomi and tell us who won? I thought so, and here I was thinking y'all might be patient with me...just in case you were the winner.

Ok, the winner was between commenter Number 1 and commenter Number 22..hee hee hee. Alrighty, I'll tell you now......I used the trusty random number generator over at random.org and here's a screen capture of whose number the generator drew out the hat for me...well actually not for me, for all you lovely people who entered my giveaway. 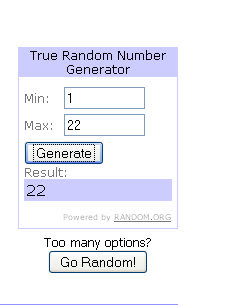 Now, if you care to look below, you would see that Kaye only entered an hour or so before I closed off the comments....talk about sailing close to the wind hey? Just goes to show, that sometimes first and last past the post do get called out!

So, as I'm in a generous mood, I drew 4 more numbers out of the hat, and they were 1, 21, 15 & 4......the four of you will be getting a wee package in the mail also. Congratulations to you all, I wish I could afford to mail out gifts to you all, maybe next time I'll put more prizes into the mix, or make it a bumper prize.....who knows, check back from time to time, and you may just catch hold of my next giveaway.

I've now emailed everyone to let them know they've won something.....so now I can publish this and go to bed....lol

If you've been reading my blog lately, you would have seen the hexagon keyring I made, well I now have VERY blurry eyes this morning after sitting up late, scouting You Tube to see if I could find a video that someone had already done on how to make the origami hexagons.....and YAY, I found one. Although it's not in English, it's an easy to follow video. I'll take pics of what to do once you have 2 of them made to turn them into keyrings, although once you've got them made, it's fairly easy to see how I made mine....lol

Also, for those who were waiting for me to do my 'own' video, I cheated...lol

Please feel free to send me links to your blog if you make any of these.

Also, don't forget, today is your last chance to sign up for my giveaway....not many people have entered, so the odds of one of you winning, are pretty good! Click here to enter, if the comments are closed off, then sorry, you missed out. I'll have another giveaway soon, but for now, good luck to anyone who's entered.

P.S. Apologies for no warning about the dog barking in the background of the video...lol I didn't actually have my speakers on at the time I viewed it....lol It was only thanks to Aunty Sharon pointing it out and me watching the video again with my speakers on, that I realise how annoying the little yapper is...lol So, sorry about that, but if it's too annoying, and you don't speak Spanish/Portuguese anyway....just watch it with no sound...Big Hugs Naomi

A few things I've made in the last couple of days 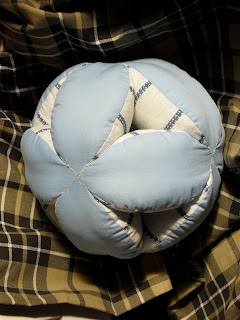 A friend of mine....Sandy, mentioned at Marion Markets once, that she wanted her friend Lois to make her one of these.....Lois told her where to go (but in a nice way) as they looked like alot of work. The other day, I found a blog that had instructions on it for making them, so on Monday, I made one.....think this one's a little big, especially if Sandy wanted it for a pin cushion....it's approximately the size of a soccer ball..lol Oh well, she's getting it whether it's the right size or not......I've already started a smaller one, but it's also not a Goldilocks one.....the 2nd one is too small, so once I've bought some more stuffing (the 1st one and the tree below have put paid to my stock of stuffing!) and finished the 2nd one off, I'll have a go at one in between the two sizes! 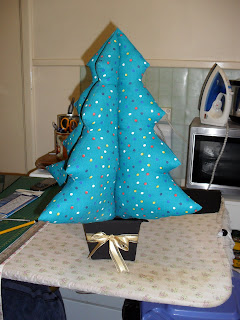 Remember the wee tree I made a few weeks ago? If not, see the post here. It was my entry for a challenge I'm in. Anyway, Raelene decided she'd like to try and make it in a bigger version.....so the above pic is what we came up with.....it's about 23" from tip to the bottom of the container it sits on...which was an old plastic container I'd gotten with flowers in a while ago...and I just made a black fabric (gotta love Homespun) cover and tied gold ribbon around it. We're going to use it on our table Christmas day....incidentally, the fabric we used for the tree is the same as the Tablerunner (backing fabric, that is) that I made here, not that I showed it in the pic of the runner...lol Can you believe that the tree took 500gm of stuffing, which is approx 1 lb of stuffing....alot huh? 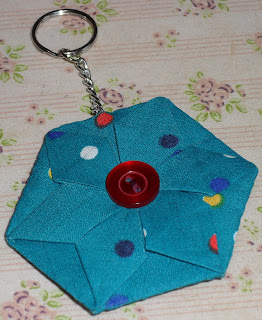 I saw a tutorial on a site (I won't name it because the person has been known to 'steal' tutorials and claim them as her own....so if you happen to know where this technique originated from, please tell me, so I can link to that instead of where I saw it) for making folded hexagon flowers, and thought they'd be interesting to make. Once I made one, I decided to make a second one and turn them into a keyring. I made this side of the keyring (above pic), and then ironed it flat....but I'm thinking that wasn't such a wise move...see next pic! 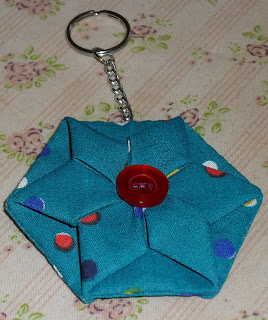 This side I didn't iron it flat, and I think it looks way better, don't you? They're a quick and easy gift to make.

What have y'all been making? I've had a quick look around some of my regular blog haunts, but I'm sure you look and don't comment too, but I'd love to hear what you've been up to. 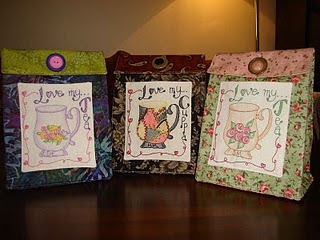 Rush on over to Susans' Blog as she's having a giveaway for a mug pouch just like those in the pic above.....giveaway ends on September 10th, so don't delay and go enter today! Either click on the photo to go directly to her giveaway, or where I mentioned her blog to go to her homepage. Good luck.

Hugs
Naomi
Posted by Beeshebags at 12:02 AM No comments: 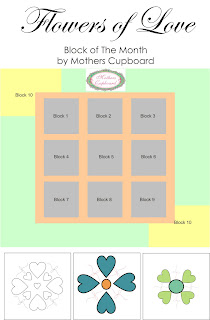 To help celebrate Spring here in Australia, Fiona or Fee as she is known to most, has a wonderful FREE BOM on the first of the month.....this months download is available right now. If you're interested in completing the BOM, she even has a giveaway for one lucky person (will it be you? will it be me? Who knows, but you have to be in it to win it..lol) I'm going to try and make this up as I think it will be a nice gift and something that I have a month to complete a block before the next one comes out....in between ALL my other want to's! Hope you'll come join us.

Hugs
Naomi
Posted by Beeshebags at 9:45 AM 2 comments: