I got another early present today

As some of you may already know, Sharina and Wayne, my next door neighbours often pop over for coffee, and when Wayne, or Mr B as I usually call him, is away at work, Sharina aka Polly, quite often comes over and we either do sewing or watch 'our' shows together.  As Mr B is heading back up to work (he works at Roxby Downs at the mines on a 12 on 6 off roster) tomorrow, they called in today for a coffee...and BONUS, they came bearing gifts.....donuts....YUMMMM and a Hooty bag of pressies. 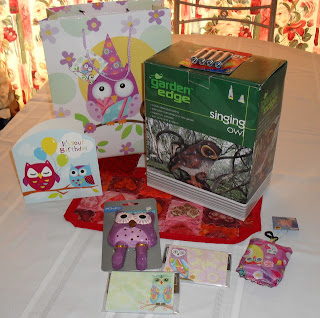 While they were here, I didn't notice that it's a singing owl (in the green box), I don't know what would've given it away....probably the big white words that say "SINGING OWL", but I didn't notice them....I was too excited....and I thought the batteries were to make the eyes light up (which they do incidentally), so I didn't actually set it up until after they went home.  I did ring them, so they could hear it hoot hooting.  It's a sensor owl and will alert me when people sneek in our front door....if I set it up near there!

Now a close up of the purple ceramic owl, which is actually a hook....it's just perfect...and owl, and in my favourite colour too. 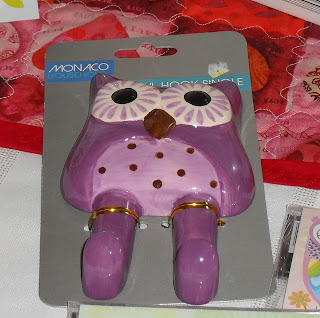 You can't quite make it out in the group shot above, but there's also one of those nylon fold up shopping bags, and you guessed it, it's got "OWLS" all over it....so here's a closer up pic of it.  It's now hanging from my handbag strap! 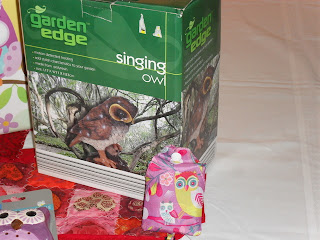 Thank you again my lovely neighbours.  I'm scoring big time for my birthday this year aren't I?  And it's not even here yet....I doubt I'll get many more pressies, but I'm already spoilt rotten with what I've received so far.

Posted by Beeshebags at 3:41 PM