A while ago, I pleaded with an 'Army' friend, to part with a couple of his old Army shirts so I could make an Army bag out of it....such as the military bags you see in the U.S.A  After a little coaxing, and the promise that he could have one of the bags to give to someone as a gift, so long as I got to keep one for me....he relented and sent me 2 shirts.

I've sat and deliberated over them for a couple (maybe it's a few!) weeks, trying to pluck up the courage to cut into at least one of the bags....Yesterday became the do or die day....and I hacked and sewed and designed on the fly.....here's the fruits of my labours.

This is the shirt in it's uncut state. 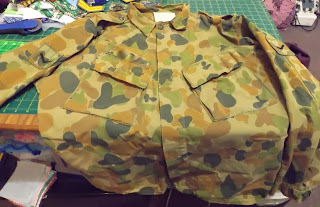 In case you're wondering, I've smudged out his name badge, to protect his identity...but on the actual bag, the name shows up....I just don't think I should be brandishing his name about in cyber space....but around South Australia on my bag, it'll be fine lol

Then, after holding my tongue to the west and the scissors to the east, and with a snip snip here and a snip snip there, I had gone too far to stop.

I managed to get a fairly decent size tote/shoulder bag, a zippered pouch and a coin purse/phone holder out of the one shirt...you beauty...that means there'll be enough for me to make me a decent sized bag, and maybe a coin purse like the one pictured below.

I removed the Aussie logo off the sleeve and sewed it (yes, I must've had my eyes crossed when I lined it up for middle....I should've used a tape measure huh?) onto the panel for the zippered pouch. 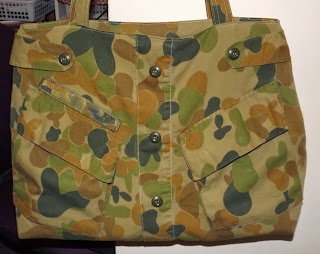 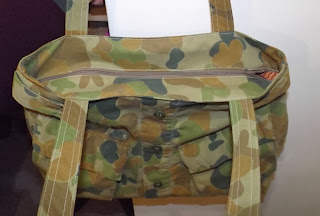 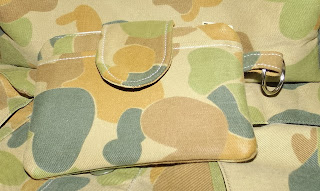 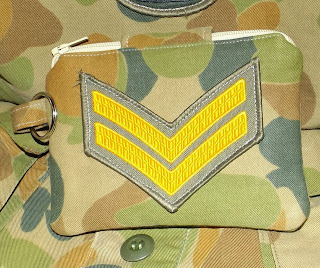 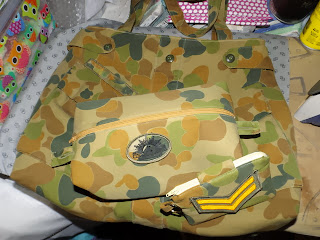 So, there you have it, bag one.....bag two to follow soon-ish....as I have 2 baby bags to make ASAP and also some Christmas Pressies I hope to achieve, along with the binding on a very special Aussie Hero Quilt for one of the girls at my quilting groups son....who we get to present it to him on 18th December.  Hopefully I'll be able to share pics of him with his quilt...will let you know.  Till next time...happy sewing.

Posted by Beeshebags at 7:23 PM