For a siggy block swap????  I'm in several 'quilty' groups on Facebook, one being Just Us Quilters or JUQ as some of refer to it.  Well I'm hosting a siggy block swap on that group, using the tutorial found here and we've all found this to be a relatively easy block to make, once the two corners are taken off of two of the triangles (I know I personally found this confusing at first, but now I can do them easy peasy!) which you'll understand if you go view the tutorial.

Currently there's 28 people in the swap, but the dilemma we're having, is we've all already swapped blocks with each other, so we're on the prowl for new people to add to the group...You don't necessarily have to have a Facebook account, but it would help!

Here's some of the blocks I've received so far: 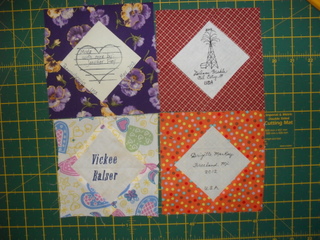 And I'd really love to get enough together to make a quilt, and 4 isn't quite enough!

One of the swappers, was lucky enough to buy some siggy blocks at a garage sale and amongst them found she had some well known peoples blocks in there....so if you're 'famous' please don't let that deter you from joining in with us...we're happy to have some of the more well known people as we're also happy to have people just like you and me too *winks*

You can be as creative or as basic as you feel able, and this swap doesn't have a time limit on it....so if at any time you wish to stop participating, you just let me know and I'll remove your name from the list.

If you wish to join in, then please either leave a comment here, or add me on Facebook (Naomi Vela) and let me know you want in on the Siggy Block Swap....we even have our own private group on there lol

Hope to have you join us soon.

Posted by Beeshebags at 8:03 PM