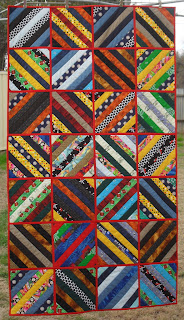 There's a slight chance I haven't mentioned my prior disgust at this quilt on the blog, but oh did it give me the irits when my planned 'quick strippy' quilt as you go quilt didn't go according to plan.  I shot it all in a pile in another room when I hit a hurdle with the construction.

What's a gal to do when none of the squares lined up when I tried to join them via the video tutorial instructions....I trimmed all the squares (Thanks to Sharina for stopping me setting fire to them!) and they've now been joined a different way altogether.  I think the original layout was different, but I don't think it looks too bad the way it's ended up looking.

Here's a close up pic of one of the particular blocks....check out the fabric I managed to utilise in the quilt....this was one of many fabrics donated to me a while back from a Facebook Friend, as were a few of the other ones in this quilt.  How fitting is the wording on that one??? 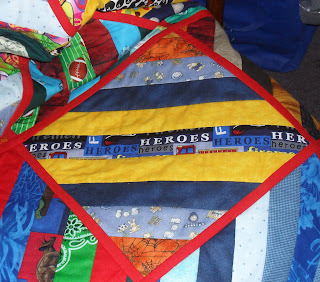 Here's a pic of the back of the quilt, showing the label I made for it.  Every time I tried to snap a pic of the back, the breeze picked up and blew the bottom of the quilt a bit....I gave up trying to get one of it just hanging nicely lol  Oh and introducing my own personal quilt police...Blackie the cat!  I'm not quite sure what he turned to look at, but he could've at least stayed gazing up at the quilt, which is what he was doing before I snapped the photo! 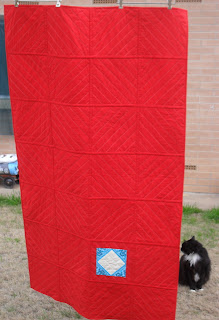 And a close up of the label, you may need to click on the pic to see it a bit clearer. 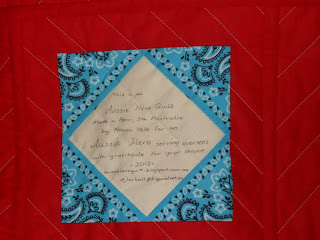 Now, this quilt is off to an undisclosed destination, however I can let you know it's going to a Naval officer. 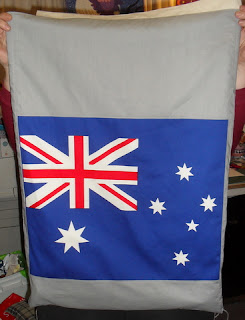 I made use of an Aussie Flag panel on the front of the laundry bag, and popped his initials on the back...so that he can easily identify his 'washing' no matter which way his bag is facing!  I have a pic of the back, but won't share that just yet....not that I expect he reads my blog, but I'm not sure if I'm allowed to or not, so will play safe and not show it.


A little birdie told us that he's getting engaged soon, so I've popped an Engagement Card in the box with the quilt etc, from all at Aussie Hero Quilts.  Hopefully we'll hear back when the box arrives, and I can share a pic or a link to a pic over at the AHQ website of him receiving his package, which his 'boss' has organised for him.

If there was any room in the box (which there won't be unfortunately), I would squish in a beanie that I've crocheted, but I may save those for the Christmas Welfare mailing, as mentioned on the AHQ blog last night.

Don't forget, if you want to help out, or just read more about what everyone else is up to, then please scoot on over to the AHQ blog...don't forget to tell Jan-Maree that I sent you!

Posted by Beeshebags at 1:14 AM