After the fake fur, came another pink and purple spotty bag, what was in that I wonder?....let's take a look.... 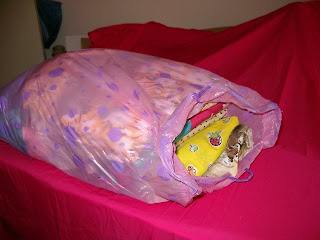 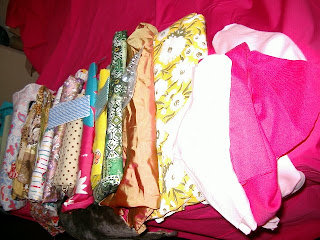 Sorry about that, the pic is sideways, but you get the idea....lots of different colours to make bags with there hey? Now a few close ups for the nosey girls from the C-R-A-F-T Yahoo group we're all in! 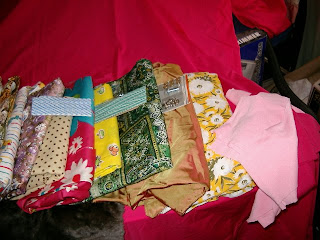 If you look closely enough, you can see the packet of press studs slipped in between the green patterned fabric and the fawny coloured satin crap! Also, along the way there are two partly used packs of blue and green bias binding.

On the right there are a couple of pieces of light pink ribbing and a bright pink piece of ribbing to be used when I make my gorgeous grand daughter some tracky's for winter.

Now before fur activists jump down my throat and greenpeace come knocking on my door with lynch mob in tow.....the piece of fur that is barely visible on bottom left corner of the pic, is more than likely older than me, and was acquired decades before it wasnt the done thing to skin animals for fashion and/or beauty.....I apologise for it, but in reality....that piece of fur will more than likely be just kept as a keepsake of my Nanna as I believe that' s who my Mum got it from.

Ok, a close up pic of the other end of that row now....sorry if the fur is till in view, but ignore it, if it bothers you. 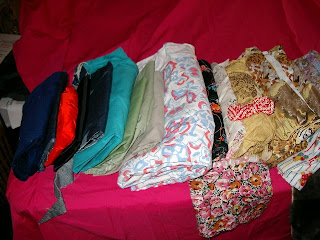 Now, out with the magnifying glasses again gals...on the top of the fawny coloured piece (three or four in from the right) is a rolled up piece of red and white silky ric rac....now that's vintage, it's probably about 50 years old knowing how old I am and that my mum's a bigger (and I'm having to be werry werry careful with spelling here!) hoarder (phew didn't say the wrong thing!) of stuff than I am...which is not easy I tell ya! I'm a bad bad pack rat, but am going to try and get out of that over the course of this year.

And like the sands in the hourglass, so are the endless pics of my fabric score! Ok, so not quite endless, but felt like it when I had to work out how to add them to the blog and get them in the right spots.....they kept appearing up the top of the blog entry...GRRRRRR I wanted them to be where the cursor was....nothing that a cut and post didn't fix *grins* 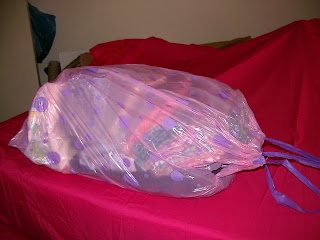 The above pic is the last of the "freebie" stuff I got from my mum....this was mostly the "off the bolt" stuff. Wanna see what's inside??? Well I'm not going to share! Oh Oh, I'd better share, coz A. Sharon'll flog me if I don't *grins*. 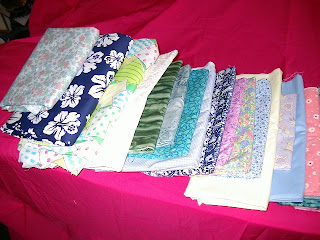 The dark blue with white flowers wasn't on a bolt though nor was the one directly to the right of it...they were pieces (5 metres or more each piece) that she had and told me to take half!

Although they may be folded different shapes, the others are all off the bolts...If there was heaps on the bolt, she said I could have more of those ones, so it wouldn't fold the same way as the smaller pieces. 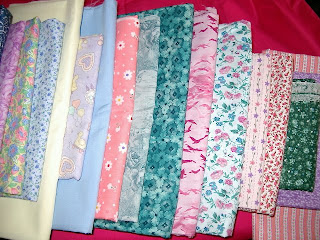 And the above is taken from slightly further over...if you look at both pics...the pink with white flowers that's almost in the middle of this pic is visible in the pic before it. The pink one with the birds on is really pretty...has pale pink back ground and different shades of pink birds over it. 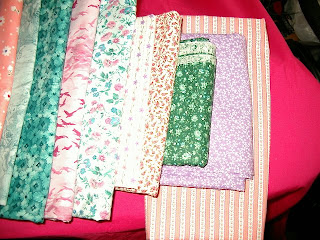 On the right shows a close up of the far right fabrics. Bet the doll makers would make use of some of them hey?
Posted by Beeshebags at 3:20 PM