I actually probably went there more than twice, however these are the latest two times I went, and what I bought. In this first pic, it kind of shows all I bought 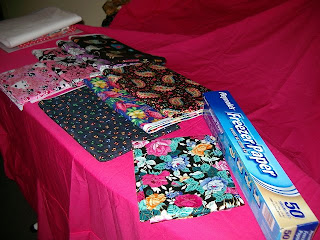 that time, including what's under the white folded stuff right at the end. I'll show that pile in another pic. I did get some freezer paper from Mums' but if I try it out and get hooked on applique, then I'll run out in a hurry...not now...I have a whole roll of it all myself....if I don't get hooked on it, I'm sure Khris (from C-R-A-F-T) will be able to make use of it! Most of the fabrics that you can see were purchased Christmas Eve and were 50% off on a Managers In Store Only special. I've taken some close ups which you can scroll down and see. 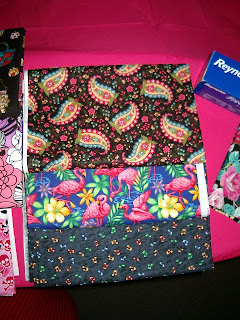 To the left you can see from top to bottom....the large paisley style print, the really pretty flamingo and tropically looking one, and some mottled black with multi coloured musical notes on it, which was out the remnant bin....I got that (just about a metre from memory) for $2 a metre! It's normally $9.95 a metre so I was rapt. The others were already discounted but still got 50% off, hee hee hee. The one that you can just see a small triangle of on the edge was one of the 50% off ones. I never pick any out of the discounted quilting bolt stuff that's over $8.00 a metre, so at most I paid $4.00 a metre for the stuff I got. 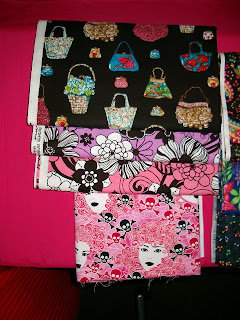 To the right you have quilting fabric with bags on....doesn't get much better than that in my extremely novice opinion! There's also some purple and black floral and the same pattern in pink and black, then at the bottom of the pile is some "Pretty In Punk" quilt fabric. I'm not actually sure if that's a play on words i.e. it's punk/gothic or if the designer is from New Zealand and it should say Pretty In Pink! ***Sorry to any of my New Zealand Friends or maybe ex-friends after that comment*** Now onto the pic of the pile of goodies that were at the end of the pic. That stuff is for a sew-a-long I'm doing during January on the Bags To Brag about tutorial(B2BA T) group (see my links list). I hope the folded white stuff will be ok, as I believe it's the closest to Fusible Fleece that Spotlight sell. 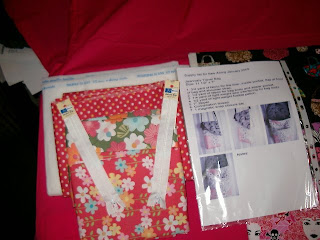 Ok the sheet of paper you can see inside a plastic sleeve is the bag we're all making (over on B2BA T), I have 2 white zips there as I'm being adventageous and making two bags at once! 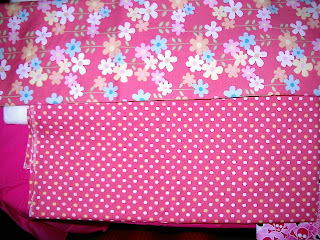 This is the fabric choices for bag number 1. I'll be using the same fabric as the one shown on the bottom of this pic, on bag number 2, which is also in the next pic. In this one, it looks more pink than it actually is. 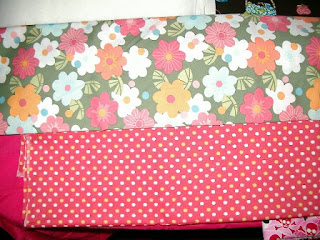 As I said, the same base colour but different ones as the focal fabric.

In this one, the mutual fabric is more like it's proper colour.
Posted by Beeshebags at 9:06 PM