Gene's having a giveaway and a little something I made 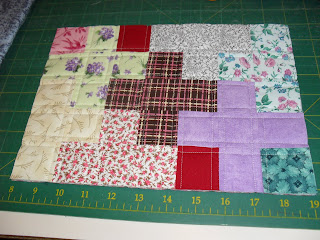 At about 2am this morning (as most crazy crafters do!), I had a brain wave and decided to try out a Plus Sign Mug Rug (Tutorial, albeit a bit scarce on instructions compared to some, can be found HERE) Obviously if you go over to the tutorial, you will notice that she's used much nicer colours....I just went digging in one of my many (don't we all have a few?) off cut (read Scrap) baskets and pulled out pieces that were big enough to make the right amount of squares, then laid them out in as pleasing a combo as I could muster!

Also, while I have your attention, Gene Black has a great giveaway for quilty read-a-holics, to go enter, click here. It closes on October 18th, 2011. Good luck.

While you're over at Gene's blog, take time to check out his video tutorials...he has a great one on cutting bias binding that seemed to be my light bulb moment with self made bias binding!