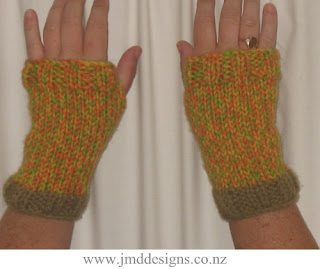 I've been inspired by these gloves since I saw them during summer, and the tutorial was filed away in the back of my brain for 'when it gets cooler'....Ummmm hullllooooo brain, it's ruddy freezing now and gloves were not made.....hence the desparation part of this post....I wanted something quick and easy to help warm my poor hands, that would allow me to type, sew etc and I didn't want to have to sew any seams....lol For anyone that's seen my knitting and crochet UFO's you'll know why I didn't want any sewing involved. So last night I grabbed my crochet hook and some yarn and had a mental pic of the above gloves in my mind.

Here's what I came up with.....I actually made 2 pairs in the one evening....with only one frogging part...which was the initial pair I started, which were WAY too big..lol 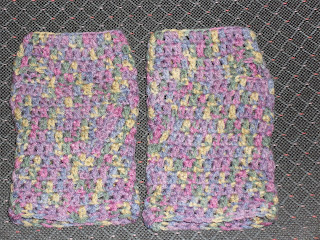 And now to show them on me, because they're not really clear in the above pic...ie you can't see the thumb holes even....I got Raelene to take a pic of them on me. 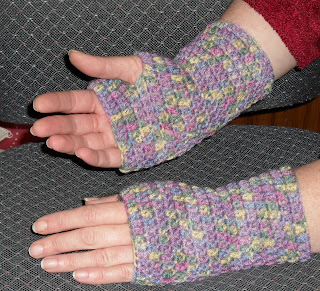 If you want to make a pair of the knitted gloves, I've made it so you'll go to the link by clicking on the photo. If you're interested in how I made my crochet ones, let me know and I'll tell you.....honestly, they are really quick and easy and at most, you'll have two ends per glove to sew/weave in....I cheated and crocheted over the starting one so I had one less to sew in at the end!

Hugs
Naomi
Posted by Beeshebags at 10:52 AM