Sometime ago, I'm not sure exactly when, I was blog hopping....yes shock, horror I know! Anyway, I noticed on someones' site that she'd like some interested people for pattern testing.....'goody goody' I said as I madly emailed her. Julie added my name to the waiting list, and even though I was excited, with all the happenings with the move, I hate to admit, but it completely slipped my mind....until yesterday when I checked my Yahoo emails and saw an email from her asking me, along with others, to test her "HEIDI BAG" pattern.

I was so ashamed that I had forgotten about the whole pattern testing thing, but thankfully, the email was less than a week old (I hardly ever check my physical Yahoo emails, preferring to have the ones for the groups I'm in to be forwarded to my Outlook Express account) so I contacted Julie and updated my details and promised to make the bag straight away.

Yesterday afternoon and evening, between a few domesticated stuff like cooking, and eating, I selected the fabric I was going to use, and whilst it won't be everyone's cup of tea, and no offence intended to Julie, I didn't want to use fabric that I could use elsewhere if I didn't like her bag.....now I'm kicking myself that I didn't use some of the cute owl fabric I got a while back off Etsy. Oh well, you live and learn don't ya? lol

Stop waffling Naomi, and show them the bag......*drum roll please* Picture heavy red velvet drapes slowly opening to reveal "Heidi" to you. Reality check...after you've looked at the gorgeous bag, have a word with the colour of the sky in the top left corner would you? Isn't it a magnificent shade of blue? I think it is anyway! Also, ignore the patchy lawn, we've had to severely weed spray it because of three corner jack weeds....they're real yowies when you tread on them, but I'll get some pics of those another time.

For those 'fussy' ones out there...no, I didn't stuff up with my cutting out, I meant the lining stripes to be different to the outer band and strap....honest! 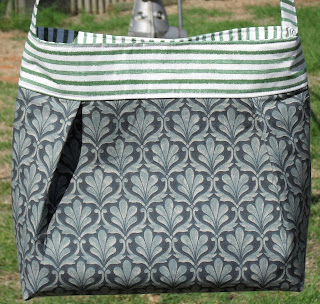 Below is a close up of the inside of the bag.....showing the split pocket and magnet closure. 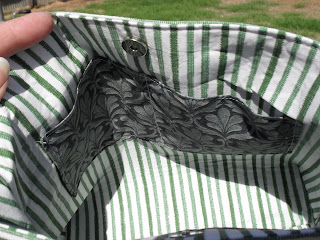 And the other side of both! 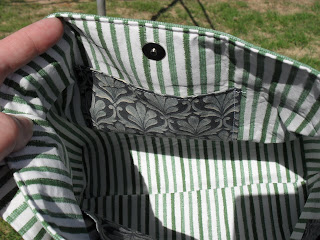 Now, I'm guessing you all want to buy this pattern, well you can't, not just yet anyway.....it's official release date isn't until February 20th 2011. If you'd like to purchase it, then head on over to Julie's blog, where you'll be able to find out more about the release date etc.

Just so you know, the pattern was very well written, and gave good explanations and had photos to show each step. I give it 10/10.

Posted by Beeshebags at 4:34 PM