Last couple of days craft round up...warts & all.

I came across a tutorial for a D9P that I liked, over here, thanks for sharing it Pat....and yesterday decided that it was time to try it, seens as though I love the D9P....coz, ever so stupidly, I thought it would hide a multitude of sins.....ha.....WRONG.....as you can see in the above pic, if you look quickly, it doesn't look too bad. It also doesn't look as neat and as regimental as Pats....what could be the reason for mine going so wonky......bad cutting is my excuse, reason and/or alibi!

Today I'm going to try again, but am going to use bigger squares....doubt if it'll make much difference really, but am going to really give myself a brain strain/fart, by concentrating over my cutting to make sure EVERY time I cut into the blocks, they're all even and all the same size.....wish me luck!

I worked out part of what I did wrong.....when you've made your 9 patch blocks and go to cut them across and down the centres.....I think I then moved some of the newly formed smaller blocks to being next to smaller blocks from a different bigger block.....ie 2 from this one and 2 from that one, don't necessarily match up in the big scheme of things....lol Or am I just grabbing at straws?

Just in case you're sitting there looking at these pics and wondering how drunk I was.....I was stone cold sober....wish I could use the excuse of being under the influence of alcohol, but alas, it was just my lousy cutting out.....gotta get my brain around the whole concept of use either the lines on the cutting mat, or the ruler, not a mixture of both.....and if I use the ruler, I've then got to try and remember to measureline up the bits I'm cutting out.....all the same way.....which do you do....have the fabric in the middle of the line markings or on the edge of the line markings....and then do you do them the closest side of the cutting line or the furthest? Oh dilemma, dilemma.......see I really do need an Accuquilt Go.....and no, this table topper wasn't a ploy for me to get one, just proves to myself that if I start doing more quilted projects, one would definately be an asset for me.....coz I know I can sew straight. 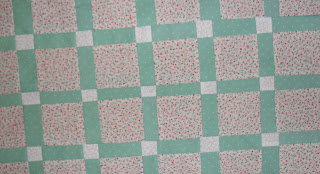 Check out the size of the white post (?) in the centre of the middle row in the pic above....how small did that one end up? hee hee hee OOOOOPS, practice makes perfect, and I WILL NOT, allow something as simple as D9P beat me.....the mission I've accepted is to get mine to look as good as Pat's. 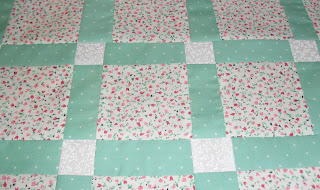 As you can see, mine went WONKY in lots of places......almost enough to be classified as a Crazy Quilt D9P....lol 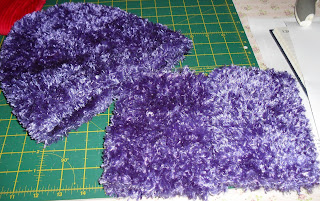 A very dear friend of mine, also loves the same colour as me.....PURPLE.....and after seeing my purple scarf I knitted for me a while back, asked for purple feather wool beanie to match.....no, not for me, I don't do hats! I just realised, in the pic above, you can see the beanie, but the knitted mitts don't really show up too good, oh well, you'll just have to imagine they're further apart.....I knitted them using the same tutorial that's inspired all the other mitts I've made recently! I knitted the beanie in just the feathers wool on its own, but the mitts I paired it with some purple 8ply. They're sooooooo warm! 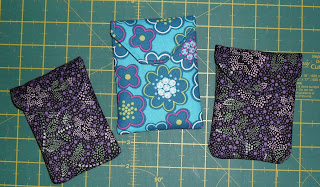 The above phone covers were made using the tutorial here. The aqua one in the middle however, I made using the same measurements, but constructed it my own way, and it doesn't have raw edges on the inside, and has a different shaped flap, which you can see better in the pic below.

The above pic shows the difference in the flap detail off.....I prefer the shape of the one on the left, but am comfortable with making the one on the right also. 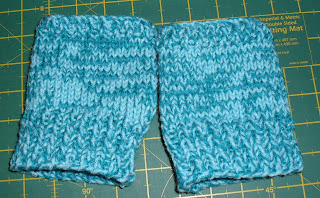 Here's a pair of mitts I knitted, using 2 different colours of 8ply (dk) yarn and size 7 needles (4/5mm) I cast on 40sts and did 10 rows rib, 18 or 20 rows of stocking st and then 4 rows of rib at the finger end. I sewed them together (rather roughly, my mum is probably having kittens in heaven at how roughly I sewed them together....but they're just for me so didn't worry too much!) leaving a gap for the thumb, just like the tutorial here. 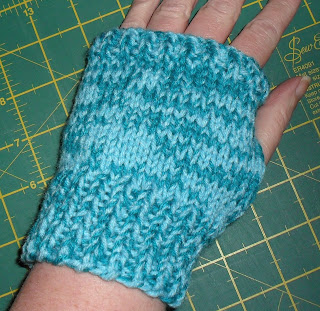 Obligatory action shot.....if I hadn't been in such a hurry, I would've knitted them longer and maybe changed to slightly smaller needles to do the ribbing near the fingers.....hindsight...always a wonderful thing hey? lol

So, in a nutshell, that's what I've been making, leave a comment and tell me what you've been making....I'd love to hear from you.

Sorry if this post is a bit confusing or if some of my comments under the pics are similar to the ones above the pics....it's because of the way that blogger allows pics to be added.....I do my posts in reverse order so I can just insert the pic, type underneath it and then add the next pic and type underneath it...etc, etc, etc. Maybe that should be a lesson for me to proof read the whole post and not just each paragraph as I type it....lol Maybe next time, for this time, I'm in too much of a rush to go find some more fabric to try another D9P runner/topper.

Hugs
Naomi
Posted by Beeshebags at 8:25 AM