......for I have sinned, it's been 6 days since I last posted....and with no further religious references, because I don't want to offend anyones' beliefs, I'll get into my latest post.

Here's a sneaky peek at the cushion cover I made for a swap in the Craft Forum (link in my sidebar).  Opening day is tomorrow, and I'll post again then to show you not only the full cover that I made, but also the one I received from my partner. 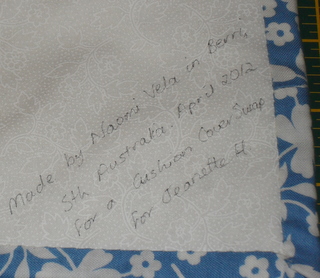 Doesn't give much away does it?   LOL, oh well only one more sleep and you can see the rest of it! 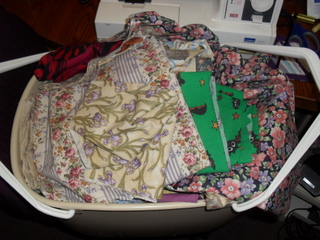 I have a very dear friend, Jenny C, who I went to Para West Adult Campus with, a few years back, and we've kept in touch, via Facebook.  Well, a couple of times now, I've managed to be on at the right time, to catch her "who'll give me $ (insert amount) for (insert photo) this fabric....both times I've scored BIG TIME, and this last time was NO exception.....I even scored the huge bucket the fabric was in....as you can see, it's overflowing...and I got all that for $10....BARGAIN CITY right? 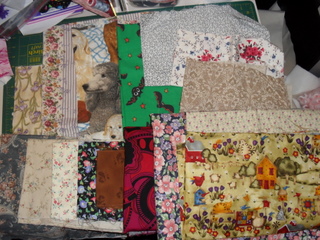 These are all pics of the fabrics I received....most are fq or bigger, some are even 2+ metres.  I don't believe I found one useless/ugly piece of fabric in there. 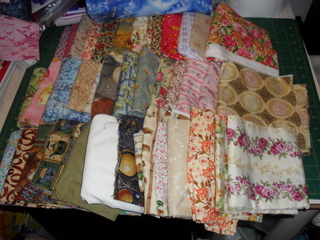 I'm happy with all of it, and if you look at the pic below, you'll see she even had some owl fabric in the mix! 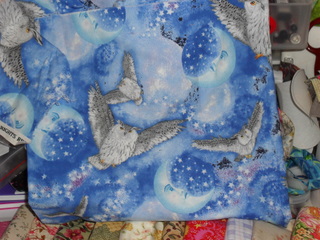 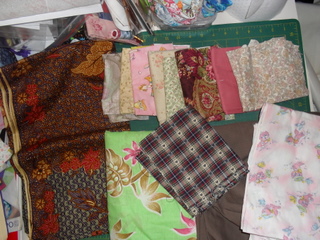 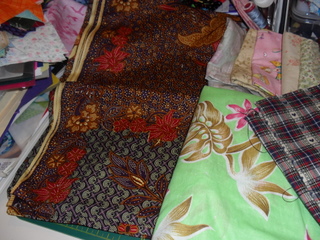 I did give a piece or two to my next door stalker, Polly, but the rest has been re folded and stacked neatly back in the bucket and will be getting used as I begin to practice quilting...yes, I still haven't mastered the art of FMQ on a domestic machine.....boo hoo hoo.

I had a friend visit for the weekend, and whilst I didn't get much done in the way of sewing, I did get a frilly scarf knitted for a client/friend who saw me showing the yarn on Facebook and put an order in for one.  They are sooooo quick and easy to knit, and once I had the right needles, had it finished in no time.  I started out with a circular needle, but got fed up of wrestling with the long loopy bit, then I swapped to straight needles but as they were long, I kept getting them hooked up in the knitted dangling end of the scarf, and it was driving me nuts, yeah yeah, I know, not a very long journey!  Here's a pic of Colleen B's scarf.

It's a really crappy pic sorry, but no one wanted to model it and the only place I could think of putting it, was on the door, which just so luckily happened to have a white dressing gown that I'm supposed to be 'blinging' up for someone!  Guess as it's gotten cooler, I should think about doing that soon hey?

Posted by Beeshebags at 2:51 PM