Another make for April

Apparently, my next door neighbour (yes, we really do live next door to each other....our driveways are adjoining!), Sharina (aka Polly) seems to think I lead her astray when it comes to crafting, however, that's NOT always the case.  The other night (Saturday I think it was) she decided that she was having a night off from crafting here, and flew solo at her place instead.  She made herself a crochet hook holder, and she used this tutorial.  I'm not a HUGE felt fan, so tonight I decided to alter the original tutorial to suit my needs.

For starters, there's not a single bit of felt in sight.  I made the hook 'pages' double sided (although I'll need to re-work them next time....as some of them kind of got split into two mini skinny pockets when I sewed the pocket page into the outside casing.  I also added an elastic closure to keep it closed when I'm taking it on my travels (no, alas, I don't have any planned yet, but these days, a trip to Adelaide is travelling right??? lol) 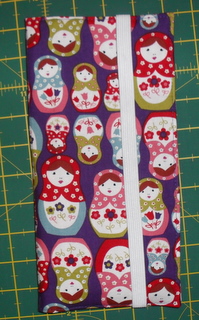 Above shows it closed...and yes, I've already utilize the fat quarters I got from Barb in the FQ Swap the other day!  There's still a wee bit of it left, so might make myself a notebook cover and that'll fit inside the cover me thinks. 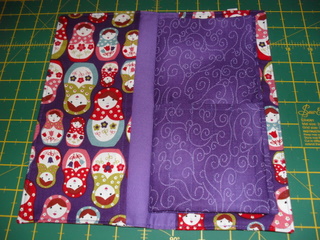 You can sort of make out the pockets on the swirly fabric, but also, inside each of the covers, there's a long pocket so I can store patterns/notes in there.  I made the middle section totally different to the felt one, and had to reverse sew the whole of that square....only once though...wasn't going to catch me out twice!  Reason I had to unpick...I'd put the pockets so that one ended up upside down and everything would've fallen out, so had to rethink the layout of them and re-do them....am happy now as they turned out ok second time around. 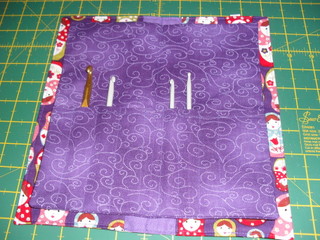 Already loaded with the stray hooks that were on my computer desk. 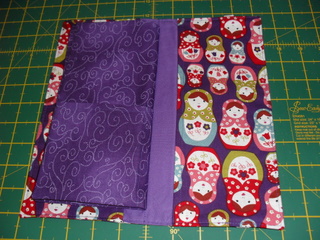 If you've been and had a look at the original....do you think mine is nice too????  I wish Polly had pics of hers up on her blog already, but as at 2.26am Tuesday (Sth Aussie time), she hadn't...maybe I can cajole her into doing that later today.

This Wednesday, Polly and I are off to Lake Bonney Quilting group...for our first all day session there....OMG what to take along to work on....maybe I should be doing some hexie hand work, or should I dig out a machine and maybe make something on the machine....decisions decisions decisions!

Posted by Beeshebags at 2:30 AM